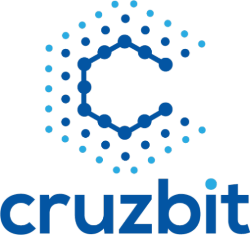 Cruzbit is a simplified, decentralized, peer-to-peer ledger implementation. Cruzbit is very much like Bitcoin, but with most of the confusing, and extraneous implementation details removed.

Built with developers in mind, cruzbit aims to make it easier to develop applications which interact with the blockchain. Application developers shouldn't have to worry about complex transaction generation or signing, and instead with cruzbit can generate transactions with just a few lines of code in most languages.

View on GitHub Chat on Discord Discuss on Reddit

Join the cruzbit network, and start trading and spending cruz. Choose a wallet, and generate one or more addresses and you're ready to start collecting cruzbit. After, you can buy cruz from an exchange, mine cruzbit on your computer, or trade it for other currencies with fellow users.

The core of the cruzbit network are its interconnected peering clients. The clients disseminate information across the network, propagating transactions, and keeping the blockchain secure. Peers can also serve as proxies for miners or other peers behind a private network, and if desired, a peer can even mine for cruz while it's contributing to the network at the same time.

Mining is how the cruzbit network validates new transactions and builds its blockchain. Mining involves performing many computationally intensive calculations, and so, for their efforts, miners are compensated by receiving cruz as a reward.

The number of mining options available to miners grows as more developers get involved, and release software for use on the cruzbit network. Get started mining, and earn some cruz.

Get A Wallet Build The Network Start Mining

Chat With A Peer

The cruzbit protocol consists entirely of JSON messages, which most programming languages are able to handle natively. JSON is pretty easy for humans to read too! Use the form below to submit a message to a real peer, and see if you can understand the response. All protocol messages are sent in plain text in this way, making interoperability a cinch.

See how easy that was? This is a real response, from a real peer on the cruzbit network. That's all it takes to exchange data between peers. Nice, huh?

Knowledge is power. The following documentation is intended for developers who want to build applications which support, or work with the cruzbit network.

This site is maintained by jstnryan, for the support of the cruzbit project. All attempts are made to ensure the accuracy of the information presented, but errors may exist. Please contact the maintainer on the cruzbit channel over the Discord service for corrections or submissions.

The content of cruzb.it (except where explicitly stated otherwise) is licensed under a Creative Commons Attribution-ShareAlike 4.0 International License.

Should you feel so inclined, donations/"tips" help to offset hosting costs, and are, of course, appreciated.